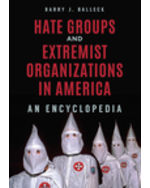 The Southern Poverty Law Center lists nearly 900 hate groups active in the US today. Some of these, such as the KKK, have deep roots in American history. Others are newer, formed in response to policies and cultural shifts. Often they imply defense of America and political ideals in their names, such as Council of Conservative Citizens and American Family Association. Some, such as White Aryan Resistance and Supreme White Alliance, are more direct in their associations. Nearly all posit an erosion of rights and values; a way of life that is becoming lost to immigrants; a diffusion or integration of population; and government overstep. Many of these groups preach a necessity for violence, through outright or thinly veiled language. Membership in these organizations poses another topic for investigation, as they are not just anti-government or pro-gun rights types who seek to defend the Constitution. Many are simply citizens who see their ideal for America as under threat.