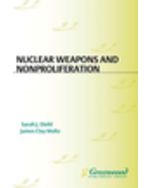 Fully updated and revised since its initial publication, Nuclear Weapons and Nonproliferation, Second Edition explores all key issues related to the proliferation of nuclear weapons and efforts to curb them, from the U.S. atomic bomb project during World War II to current debates on nuclear terrorism, North Korea's nuclear test, and Iran's enrichment program.