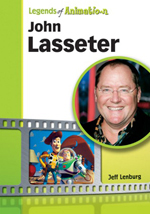 A two-time Academy Award-winning director and animator, John Lasseter is a founding member of and the creative force behind Pixar Animation Studios. Pixar is responsible for ushering in the age of computer-animation and revolutionizing the industry, having produced blockbuster features such as Cars, Finding Nemo, The Incredibles, Monsters Inc., and Wall-E. Lasseter began his career in animation at Walt Disney Feature Animation, where he soon became fascinated by the potential for creating animation using computer-generated images. After a move to a division of Lucasfilm that would become Pixar, Lasseter wrote, directed, and produced many computer-animated short films and television commercials, including the first completely computer-animated short to win an Oscar, Tin Toy. He then began work on the first computer-animated feature film, the landmark Toy Story, which forever changed the animation industry. In John Lasseter, learn how this creative mind keeps bringing lasting characters and stories to the big screen through the wizardry of animation.