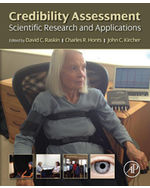 In 2001, the late Murray Kleiner and other experts contributed to the Handbook of Polygraph Testing, which examined the fundamental principles behind polygraph tests and reviewed the key tests and methods used at that time. In the intervening thirteen years, the field has moved beyond traditional polygraph testing to include a host of biometrics and behavioral observations. The new title reflects the breadth of methods now used. Credibility Assessment builds on the content provided in the Kleiner volume, with revised polygraph testing chapters and chapters on newer methodologies, such as CNS, Ocular-motor, and behavioral measures. Deception detection is a major field of interest in criminal investigation and prosecution, national security screening, and screening at ports of entry. Many of these methods have a long history, e.g., polygraph examinations, and some rely on relatively new technologies, e.g., fMRI and Ocular-motor measurements. Others rely on behavioral observations of persons in less restricted settings (e.g., airport screening). The authors, all of whom are internationally-recognized experts associated with major universities in the United States, United Kingdom, and Europe, review and analyze various methods for the detection of deception, their current applications, and major issues and controversies surrounding their uses.