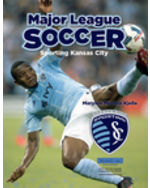 When U.S. Soccer promised FIFA it would create a professional men’s soccer league in return for hosting the 1994 World Cup, Major League Soccer was born. Ten teams were part of the original MLS, and Sporting Kansas City, known then as the Kansas City Wiz, was one of them. The club has had its ups and downs over the years, yet this team of two cities has proven victorious time and time again by winning the U.S. Open Cup three times, the MLS Cup twice and the Supporters Shield once. Sporting Kansas City confirms what SKC fans already know. Whenever their team plays, it’s sure to be a sporting good game!