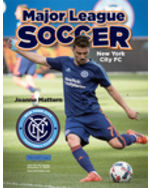 Major League Soccer began in North America in 1996. Ten years later, the league decided it needed a team in New York City. After years of work, the New York City FC played its first game in 2015, and they have been exciting fans ever since. Led by several World Cup-winning players from Europe plus some great American talent, the FC has gone on to become a great team! This book explains the history of soccer and MLS and features all the excitement and challenges of one of the most popular clubs in the league.