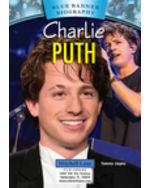 Charlie Puth did not grow up dreaming of being a pop star. Instead, he wanted to do what he loved most: write music. This young man who learned to play the piano at the age of four, had a clear talent for writing and composing, which led him to study jazz and classical music during his school years. He later earned a degree in music production and engineering. After graduating from the Berklee School of Music, he thought he would make his living helping others record music, but an invitation to record a song he had written for Wiz Khalifa with the rap artist changed all that. Today Charlie is one of the country’s most popular pop performers.