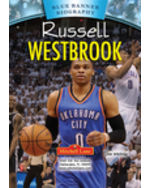 Russell Westbrook grew up loving the game of basketball. But he never imagined that he would actually play professionally. But his hard work and determination made it possible. As a young boy, he would practice the sport for hours at a time. As a high school freshman, he would play among the seniors on his team. His natural talent and his drive to succeed led him to play as a freshman on his college team as well. Two years later, he decided to enter the NBA draft—and his life would never be the same.