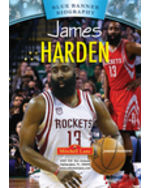 James Harden wanted to be a basketball player from the time he could bounce the ball. However, this future star faced many challenges. He had to overcome poor health and a lazy attitude. He had to learn to listen to his teammates and become a leader. He even struggled with being the center of attention as a celebrity star. Through it all, James Harden worked hard and learned from his mistakes. He became one of the best basketball players in the world and a true MVP.