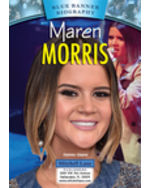 Maren Morris practically grew up as a country music performer. Her parents discovered her talent for singing when Maren was just nine years old. They then began supporting her in every way they could. They bought their daughter a guitar and encouraged her to explore her deep love for country music. After performing at various venues around her home state of Texas, Maren decided to move to Nashville to find a job as a songwriter. After writing songs for stars like Tim McGraw and Keely Clarkson, Maren decided to record the next song she wrote herself. That song helped launch Maren’s career as one of the most popular country stars today.