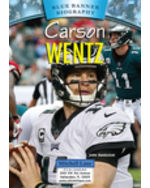 Carson Wentz learned to be patient. In high school, his older brother was the starting quarterback. Carson didn’t get to start until his senior year. At North Dakota State University, he waited three years before starting for the Bison. Yet all that waiting helped. He spent the time learning to lead. He trained and reviewed plays. In practice, he became the toughest quarterback the Bison faced. When Carson became a quarterback for the Eagles he no longer had to wait. He became a starter right away. And Eagles’ fans only had to wait one year for their team to win its first-ever Super Bowl.