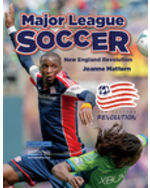 When Major League Soccer began in North America in 1996, the New England Revolution was one of the first clubs. Since then, the club has energized the league with skilled players, exciting games, and many championship appearances. Readers will learn about the history of soccer and MLS in this appealing book. They will also learn about the Revolution and its greatest players, as well as the challenges they face, in this exciting guide to one of the world's most popular sports.

Front Cover.
Copyright Page.
Other Frontmatter.
Contents.
1: Major League Soccer.
2: How the Revolution Started.
3: Playing Our Game.
4: The Revolution's Best Players.
5: Communicating on and off the Field.
What You Should Know.
Quick Stats.
New England Revolution Timeline.
Glossary.
Further Reading.
On the Internet.
Index.
About the Author.