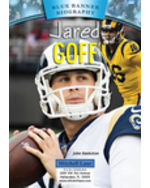 For Jared Goff, throwing a football was always easy. He was so good at it that he became the first true freshman starting quarterback in University of California Berkeley history. But when he became a pro football player in 2016, it suddenly wasn’t as easy. In his first year with the Los Angeles Rams, the team lost all seven games he started. Jared didn’t give up. He didn’t blame others. He just worked harder while never forgetting how to have fun. It all paid off as the Rams had a winning record in his second season. The future looks very bright for this gifted young quarterback.

Front Cover.
Copyright Page.
Blue Banner Biography.
1: On the Line.
2: Getting in the Game.
3: Keeping Cool in High School.
4: Too Much to Bear.
5: To Live and Play in L.A..
Chronology.
Career Stats.
Find Out More.
Works Consulted.
Other Backmatter.
Index.