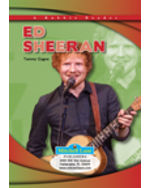 Ed Sheeran was an unlikely music superstar. With his bright red hair and casual fashion sense, he doesn’t look like many other popular musicians that top the charts today. He also doesn’t sound like everybody else. Ed’s unique form of rap music played on his acoustic guitar is just one of the things that set this British musician apart from the rest of the crowd. By embracing all the things that make him different, Ed has learned that quirks can make a talented performer stand out in the competitive world of pop music.

Front Cover.
Copyright Page.
Table of Contents.
1: Singing Out Loud.
2: A Weird and Talented Kid.
3: A Different Style.
4: Grime, the Olympics, and the Queen of England.
5: Making History.
Chronology.
Find Out More.
Other Backmatter.
Glossary.
Index.