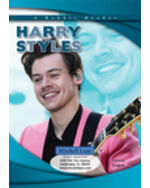 British superstar Harry Styles rocketed to fame around the world as a member of the pop music group One Direction. The band had formed in 2010 while its members were competing on the televised talent competition The X Factor. After ruling the pop music charts for several years and selling out nearly every concert they played, the group decided to call it quits in 2015. But Harry was far from done with the music business. He wanted to pursue a rock music career on his own. Today he is a successful solo music artist as well as a promising actor.