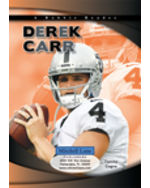 Derek Carr seemed destined to play football. His older brother David became a professional player when Derek was just a boy. His brother Darren coaches the sport at the high school level. But no one knew just how far the youngest Carr brother would take his football career. After playing through high school and college, Derek was chosen by the Oakland Raiders in the 2014 NFL Draft. Since that time he has risen to the ranks of the best quarterbacks in the nation. In addition to being a talented athlete, Derek is also a dedicated Christian, family man, and volunteer. He says that his life is all about his faith, family, and football.