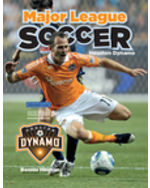 Soccer is a very old game. Played everywhere, it is probably the most popular sport in the world. Most fans call it football except in the U.S. and Canada. Football is a good name since only feet and sometimes heads are supposed to touch the ball. A soccer match is fast-moving and exciting to watch. No soccer players stand around on the field. They move in outstanding displays of athletic ability. Houston Dynamo has had some bad seasons in recent years. Under Head Coach Wilmer Cabrera, they are climbing to the top of Major League Soccer rankings once again.