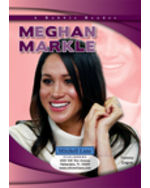 Meghan Markle was not born into a royal family—or even a wealthy one. Her father worked as a lighting director on a television show. Her mother was a yoga instructor and social worker. After graduating from college with a communications degree, Meghan decided to pursue an acting career. This took a lot of hard work and patience. But she was as determined as the character she would one day play on the television show Suits. Few people could have predicted the next big event in her life, however. After meeting Prince Harry on a blind date, Meghan would soon become his wife and dedicate the rest of her working life to humanitarianism.