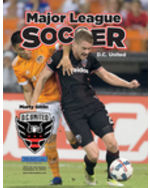 Major League Soccer was born in 1996. And so was the run of greatness for D.C. United. The Black-and-Red captured three league championships in the first four years. They have since won many other events. D.C. United has also featured many of the finest players in MLS history. It is no wonder that they are considered one of the greatest franchises ever in Major League Soccer. This book places the reader on the field. That is where exciting stars such as Jaime Moreno and Marco Etcheverry thrilled D.C. United fans with their brilliant play. It is where goalkeepers like Tony Perkins and Bill Hamid stopped shot after shot. And it is where the Black-and-Red dominated the league in their early years.

Front Cover.
Copyright Page.
Other Frontmatter.
Contents.
1: All About Major League Soccer.
2: Planting the Seeds of Success.
3: How the Game Is Played.
4: Best of the Best.
5: A New World.
What You Should Know.
Quick Stats.
D.C. United Timeline.
Glossary.
Further Reading.
On the Internet.
Index.
About the Author.