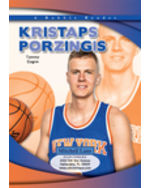 Not everyone was happy with the New York Knicks’s 12th overall pick in the 2015 NBA Draft. Many even booed at the selection of Kristaps Porzingis. But he didn’t let the jeers stop him from celebrating. The young Latvian player had played professional basketball in Spain before coming to the United States, where he would soon become one of the best known players in the sport. Kristaps knew he would have to work hard to win over his city. And he was up to the task. Some of those fans now see the 7-foot, 3-inch power forward and center as the player who will lead the Knicks to their first NBA finals in decades.