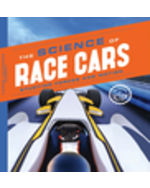 In this engaging title, young readers learn about the moving form of energy that is motion. The relationship of mass and acceleration is explained, as are the forces of downforce, updraft, friction, inertia, centripetal force, and the role of aerodynamics in managing these forces. These properties are illustrated by the running of car races. Colorful infographics make internal combustion, mass and acceleration, and centripetal force easily accessible, and prominent contributors such as Junior Johnson and Sir Isaac Newton are featured. A fun experiment with friction brings the science of motion to life. Aligned to Common Core Standards and correlated to state standards.