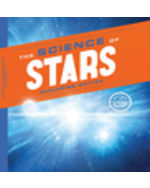 In this engaging title, young readers learn about the different states of matter. Atoms and molecules are explained, as are elements and the periodic table. The three main states of matter solid, liquid, gas are covered, as are the properties of each and the role of energy in their changing from one form to another. These properties are illustrated by the birth and collapse of stars. The rare states of matter plasma and Bose-Einstein condensate are introduced. Colorful infographics make measuring matter, the parts of an atom, the movement of atoms and the layers of Earth's atmosphere easily accessible, and prominent contributors such as Satyendra Nath Bose and Albert Einstein are featured. A fun experiment with gas brings the science of matter to life. Aligned to Common Core Standards and correlated to state standards.