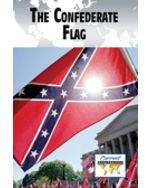 Is it a symbol of pride in one's heritage or an ugly reminder of slavery and the fruits of racism? The issue of whether the Confederate flag belongs in front of government buildings, or even on Southern pride paraphernalia, has been a hot button for more than a century, long after the Civil War was fought and won. This book takes a close look at the flag's origins, its controversial history, what meaning it has for Americans living today, and the ongoing debate on its use and display.