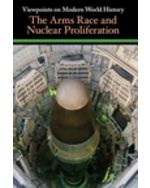 Following the bombings of Nagasaki and Hiroshima, the twentieth century was haunted by the specter of nuclear annihilation. Locked in a hostile embrace, the U.S. and the USSR engaged in a ruinous arms race preparing for the kind of war no one wanted and no one could win. Though the Cold War ended, the dangers of nuclear proliferation remain, with poorly secured nuclear weapons and materials vulnerable to theft, sale, accident, or misuse. The many debates over the years surrounding the arms race, proliferation, deterrence, and security are collected here to provide readers with a fine-grained sense of the international tensions, political urgency, diplomatic strategies, and global fears that have long underlined the effort to build and maintain nuclear arsenals.

Front Cover.
Half Title Page.
Other Frontmatter.
Title Page.
Copyright Page.
Contents.
Foreword.
Introduction.
1: A Blast from the Past and Later Threats.
2: The Major Players in a Deadly Game.
3: Planning a Peaceful Future.
Chronology.
Bibliography.
Index.