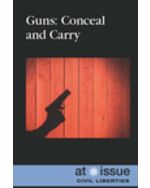 Nowhere is the gun control debate more heated than in the United States. Gun control advocates argue for tighter restrictions on purchasing and licensing in the hopes of reducing incidents of shootings. Gun owners fear that their guns will be taken away, eliminating their ability to protect their families. Carrying a concealed handgun is legal in every state, and polls shows that the majority of Americans support conceal and carry. The viewpoints in this volume attempt to answer tough questions, such as “Do concealed handguns deter or increase crime?” and “Do the protections stipulated in the Second Amendment cover today’s gun owners?”