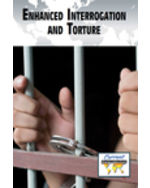 You hear about waterboarding, but what exactly does it mean? This informative, and at times unflinching, collection of essays explores the radical tactics used by government-sanctioned agencies, and those used by terror groups, to ferret out key intelligence from detainees. Topics range from the Geneva Convention to the conditions at Iraq's Abu Ghraib prison to the impact of the viral execution videos released by ISIS. A frank look at a difficult subject, this book is recommended for older readers who may already be studying the effects of war or current events.