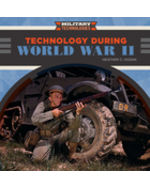 In this title, readers will examine the technology used by military forces in World War II. Engaging text introduces readers to Sherman M4 and Panzer tanks, riles, P-51 Mustang, B-17 bomber, destroyers, aircraft carriers, submarines, Enigma and SIGABA machines, atomic bombs, and the roles they played in military campaigns. A short history of the war is also included. Aligned to Common Core standards and correlated to state standards.