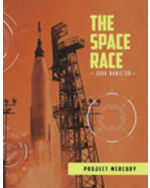 This title will explore the beginnings of the Space Race, including the development and launch by the Soviet Union of Sputnik, the world’s first satellite. America’s response was Project Mercury, run by the newly formed NASA. With its goal of putting astronauts into Earth orbit, Project Mercury spawned such household names as John Glen, Alan Shepard, and the other Mercury 7<\Q> astronauts. Will also examine animals in space, and the parallel space exploration programs of the Soviet Union, including the efforts of rocket designer Sergei Korolev. Aligned to Common Core Standards and correlated to state standards. Abdo & Daughters is an imprint of Abdo Publishing, a division of ABDO.<\P>