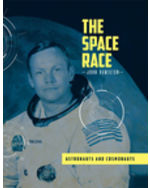 This title will include biographies of important figures of the Space Race from both the United States and the Soviet Union. These men and women with include: Neil Armstrong, Buzz Aldrin, Michael Collins, Alan Shepard, John Glenn, Yuri Gagarin, Valentina Tereshkova, and others. Aligned to Common Core Standards and correlated to state standards. Abdo & Daughters is an imprint of Abdo Publishing, a division of ABDO.<\P>