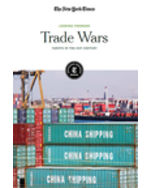 For many years, the United States has had established trade agreements with other countries to regulate the even flow of goods and maintain a healthy economy. But many of these entrenched trade agreements have now been upended, and with new tariffs being implemented, the global economic relationships between countries are changing. Will new tariffs help or hurt the United States and its traditional allies? How will U.S. industries be affected? With newer, more severe tariffs in place, bringing tariff retaliation from other trading partners, the future of trade relationships is shifting and uncertain.