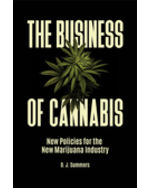 The Business of Cannabis: New Policies for the New Marijuana Industry, 1st Edition

Despite the unique culture surrounding cannabis, this new industry follows the same economic principles as does any other agricultural product-that is, it would if the federal government allowed it to. Four distinct challenges prevent the cannabis industry from becoming fully legal and federally regulated in the United States, equivalent to the alcohol, pharmaceutical, or tobacco industries: federal regulations counter to state laws, an unfriendly financial system, a U.S. attorney general bent on keeping the drug war running, and Prohibition's 70-year-old legacy of distrust between legalization advocates and opponents. Policy, however, is changing. Already the world's most heavily consumed illicit drug is in the midst of an international transformation. Globally, a new international trade market has emerged from efforts to legalize it for medical or recreational use, and in the United States, the nascent cannabis industry has acquired lobbyists, well-financed industry kingpins, an extensive ancillary industry, and taxation. The Business of Cannabis explores these issues in depth and contextualizes U.S. drug policy at a time when lawmakers across the nation are deciding which way to lean on the issue.