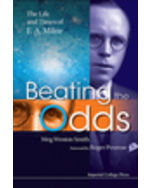 Beating The Odds: The Life And Times Of E A Milne, 1st Edition

E A Milne was one of the giants of 20th century astrophysics and cosmology. His bold ideas, underpinned by his Christianity, sparked controversy - he believed two time scales operate in the universe.Struggling against poverty, Milne won five scholarships to Cambridge, but he never finished his degree. In World War I he was invited to develop Horace Darwins device for anti-aircraft gunnery and after the Armistice his prowess in ballistics took him straight to a Fellowship at Trinity College, Cambridge. By the age of thirty he was a Manchester professor and a Fellow of the Royal Society. At Oxford he battled to improve the universitys attitude towards science, and established a world-centre of astrophysics. He suffered from Parkinsonism in his forties, the consequence of his having had encephalitis lethargica as a young man. However, buoyed by his Christian faith, he did not slacken his pace. When he died, twice widowed, the author - Milnes daughter - was a teenager.This book is born out of curiosity. The authors aim is to show the human face of science, how the course of her fathers life was shaped by circumstance and by the influence of illustrious friends and colleagues such as Einstein, Eddington, G H Hardy, J B S Haldane, Hubble, F A Lindemann and Rutherford. Against all odds, Milne emerged as a scientific powerhouse - and a rebellious one at that.

Front Cover.
Half Title Page.
Title Page.
Copyright Page.
Dedication.
Other Frontmatter.
Foreword.
Preface.
Acknowledgements.
List of Figures.
Abbreviations in the Footnotes.
Contents.
1: A Foothold on the Ladder.
2: The Upheavals of War.
3: Adventures with Reflections.
4: The Trials of Trumpets.
5: Cambridge Rhapsody.
6: Riding on a Sunbeam.
7: New Horizons.
8: A Scientific Wilderness.
9: Cut and Thrust.
10: Family versus College.
11: Cosmic Inspiration.
12: Oxford's Enlightenment.
13: The Pendulum and the Atom.
14: Lifeline.
15: Mathematics, Bombs and Bureaucracy.
16: An Invitation.
17: A Race Unfinished.
Epilogue.
Index.