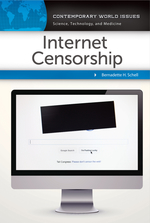 Combining reference entries with perspective essays, this timely book undertakes an impartial exploration of Internet censorship, examining the two sides of the debate in depth. On the one side are those who believe censorship, to a greater or lesser degree, is acceptable; on the other are those who play the critical role of information freedom fighters. In Internet Censorship: A Reference Handbook, experts help readers understand these diverse views on Internet access and content viewing, revealing how both groups do what they do and why. The handbook shares key events associated with the Internet's evolution, starting with its beginnings and culminating in the present. It probes the motivation of newsmakers like Julian Assange, the Anonymous, and WikiLeaks hacker groups, and of risk-takers like Private Bradley Manning. It also looks at ways in which Internet censorship is used as an instrument of governmental control and at the legal and moral grounds cited to defend these policies, addressing, for example, why the governments of China and Iran believe it is their duty to protect citizens by filtering online content believed to be harmful.