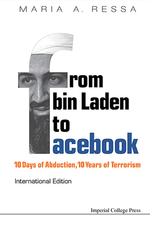 From Bin Laden To Facebook: 10 Days Of Abduction, 10 Years Of Terrorism, 1st Edition

In this groundbreaking work of investigative journalism, Maria Ressa traces the spread of terrorism from the training camps of Afghanistan to Southeast Asia and the Philippines. Through research done at the International Center for Political Violence & Terrorism Research in Singapore and sociograms created by the CORE Lab at the Naval Postgraduate School, the book examines the social networks which spread the virulent ideology that powered terrorist attacks in the past 10 years.Many of the stories here have never been told before, including details about the 10 days during which Ressa led the crisis team in the Ces Drilon kidnapping case by the Abu Sayyaf in 2008. The book forms the powerful narrative that glues together the social networks - both physical and virtual - which spread the jihadi virus from bin Laden to Facebook.