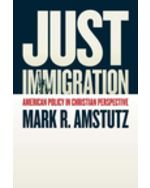 Few issues are as complex and controversial as immigration in the United States. The only thing anyone seems to agree on is that the system is broken. Mark Amstutz offers a succinct overview and assessment of current immigration policy and argues for an approach to the complex immigration debate that is solidly grounded in Christian political thought. After analyzing key laws and institutions in the US immigration system, Amstutz examines how Catholics, evangelicals, and main-line Protestants have used Scripture to address social and political issues, including immigration. He critiques the ways in which many Christians have approached immigration reform and offers concrete suggestions on how Christian groups can offer a more credible political engagement with this urgent policy issue.