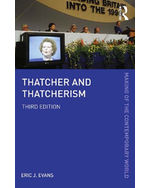 This fully revised and updated third edition of Thatcher and Thatcherism examines the origins and impact of Thatcherism' as a cultural construct and an economic creed from the 1970s to the formation of a coalition government in 2010.

Focusing on the career of Margaret Thatcher, Eric J. Evans questions both the originality and the ideological coherence of Thatcherism . He argues that while Thatcherism was a bold experiment in an ideologically driven government that, despite Thatcher's political dominance, failed to meet its main objectives.