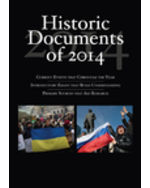 This book is renowned for the well written and informative background, history, and context it provides for each document. The 2014 volume will begin with an insightful essay that sets the year’s events in context, and each document or group of documents is preceded by a comprehensive introduction that provides background information on the event. Full-source citations are provided. Readers have easy access to material through a detailed, thematic table of contents and a cumulative five-year index that directs them to related material in earlier volumes.