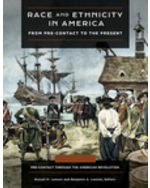 
Race and Ethnicity in America: From Pre-contact to the Present, 1st Edition