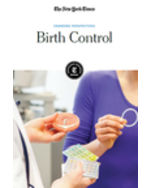 Birth control has existed in many forms over the course of history, but in the United States, the term itself was not in popular discourse until 1914. At that time, it was illegal to even distribute information about birth control. In the 1950s, the first oral contraceptive, known simply as "the pill" was developed. It was approved for use in the United States in 1960, and the uphill battle for religious and political approval began. This compilation includes New York Times articles that span a period of more than one hundred years. They provide vital context on birth control to those who want to know how we arrived at the medical, social, and political moment of today. Media literacy terms and questions are included to engage readers and activate critical thinking skills.