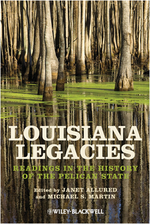 Louisiana Legacies: Readings in the History of the Pelican State, 1st Edition

Combining the best previously-published articles and essays on a variety of historical topics, Louisiana Legacies provides a compendium of well-written and accessible perspectives on the state's history. The volume covers material ranging from colonial era interactions between Native Americans and the first European settlers to the environmental history of the states southern wetlands, whose ecology is internationally recognized for its stunning natural diversity as much as its extreme vulnerability to the pressures of climate change and human encroachment. The collection reflects the richness of todays historical purview, with tightly focused chapters on a multitude of fascinating subjects. They include analyses of Louisianas tumultuous political history in the modern era, its troubled road towards racial equality, and the fiery debate over racial attitudes. The unique cultural qualities of Louisiana, including its Cajun cuisine and the inimitable jazz tradition of New Orleans, are also areas of focus.

Front Cover.
Half Title Page.
Title Page.
Copyright Page.
Contents.
Editors' Preface.
1: Louisiana's Colonial Context.
2: The Frontier Exchange Economy of the Lower Mississippi Valley before 1783.
3: The Moral Climate of French Colonial Louisiana, 1699–1763.
4: Oliver Pollock's Plantations: An Early Anglo Landowner on the Lower Mississippi, 1769–1824.
5: Women, Race, and Class in Early Louisiana.
6: Desiring Total Tranquility—and not Getting It: Conflict Involving Free Black Women in Spanish New Orleans.
7: A Female Planter from West Feliciana Parish: The Letters of Rachel O'connor.
8: The Murder of a “Lewd and Abandoned Woman”: State of Louisiana V. Abraham Parker.
9: Transformation of the Louisiana “Creole”.
10: Early New Orleans Society: A Reappraisal.
11: In My Father's House: Relationships and Identity in an Interracial New Orleans Creole Family, 1845–1875.
12: Violent Louisiana.
13: “I Would Rather Be among the Comanches”: The Military Occupation of Southwest Louisiana, 1865: The Military Occupation of Southwest Louisiana, 1865.
14: From the Barrel of a Gun: The Politics of Murder in Grant Parish.
15: Feuding Is Our Means of Societal Regulation: Elusive Stability in Southeastern Louisiana's Piney Woods, 1877–1910.
16: An Inhospitable Land: Anti-Italian Sentiment and Violence in Louisiana, 1891–1924.
17: Progressives and Race.
18: When Plessy Met Ferguson.
19: The Rest of the Story: Kate Gordon and the Opposition to the Nineteenth Amendment in the South.
20: In Pursuit of Louisiana Progressives.
21: Modern Louisiana Politics.
22: “What He Did and What He Promised to Do … “: Huey Long and the Horizons of Louisiana Politics.
23: Huey Long: A Political Contradiction.
24: “When I Took the Oath of Office, I Took no Vow of Poverty”: Race, Corruption, and Democracy in Louisiana, 1928–200.
25: The Politics of Poverty and History: Racial Inequality and the Long Prelude to Atrina.
26: Transitions in Race Relations.
27: Racial Repression in World War Two: The New Iberia Incident.
28: Transitional Generations: African American Workers, Industrialization, and Ducation in the Northern Louisiana Lumber and Paper Industries, 1930–1950.
29: Culture and Environment in Modern Louisiana.
30: Making the “Birthplace of Jazz”: Tourism and Musical Heritage Marketing in New Orleans.
31: Commercialization of Cajun Cuisine.
32: Who Destroyed the Marsh?: Oil Field Canals, Coastal Ecology, and the Debate Over Louisiana's Shrinking Wetlands.