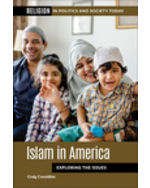 Islam is the most misunderstood and misrepresented religious tradition in the United States, depicted as an oppressive and violent political system and its followers as backward and un-American. The stereotypes about Islam and Muslims in the U.S. calls for a new sociological understanding that confronts the menacing bigotry and racism rising in the U.S. today. Through an overview essay, chronology, and roughly 50 alphabetically arranged entries, this reference explores the intersection of Islam, Muslims, and American national identity. The primary focus is contemporary issues and developments relating to Islam in the U.S., but the entries also incorporate a fuller picture of Islam in general and Muslims worldwide. Included are entries on history, race and ethnicity, interfaith commonalities, politics, discrimination and hate, and national identity. The entries cite works for further reading, and the book closes with an annotated bibliography of the most important resources.