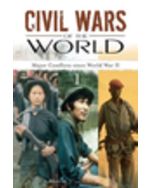 In the post World War II era, warfare has broken out in virtually every corner of the globe, and the majority of those conflicts have been internal nations at war with themselves, fighting over age-old ethnic and religious hostilities, territorial autonomy, political ideologies, the nation's wealth, and more. What are the causes of civil war? Why are they more common in some regions than in others?