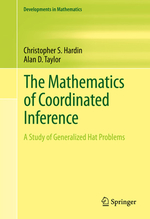 Two prisoners are told that they will be brought to a room and seated so that each can see the other. Hats will be placed on their heads; each hat is either red or green. The two prisoners must simultaneously submit a guess of their own hat color, and they both go free if at least one of them guesses correctly. While no communication is allowed once the hats have been placed, they will, however, be allowed to have a strategy session before being brought to the room. Is there a strategy ensuring their release? The answer turns out to be yes, and this is the simplest non-trivial example of a "hat problem." This book deals with the question of how successfully one can predict the value of an arbitrary function at one or more points of its domain based on some knowledge of its values at other points. Topics range from hat problems that are accessible to everyone willing to think hard, to some advanced topics in set theory and infinitary combinatorics. For example, there is a method of predicting the value f(a) of a function f mapping the reals to the reals, based only on knowledge of f's values on the open interval (a – 1, a), and for every such function the prediction is incorrect only on a countable set that is nowhere dense. The monograph progresses from topics requiring fewer prerequisites to those requiring more, with most of the text being accessible to any graduate student in mathematics. The broad range of readership includes researchers, postdocs, and graduate students in the fields of set theory, mathematical logic, and combinatorics. The hope is that this book will bring together mathematicians from different areas to think about set theory via a very broad array of coordinated inference problems.