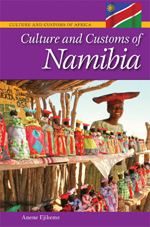 Namibia is a sizeable and significant country in southern Africa that is little known to the outside world. A vast country of startling beauty with a storied history, including one of the world's worst genocides and a war of independence that lasted nearly a quarter century, this "land between two deserts" is a fascinating result of its African, German, and English influences. CULTURE AND CUSTOMS OF NAMIBIA is one of very few English language works written about Namibia's history, culture, and society. The book reveals details about Namibian daily life, gender relations, modern youth culture, and the influence of traditional cultures that allow readers to appreciate this country's unique character. A section on tourism explains how Namibia—an extremely arid country with an immense number and diversity of wildlife—is on the cutting edge of ecotourism.