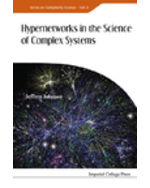 Hypernetworks In The Science Of Complex Systems, 1st Edition

The modern world is complex beyond human understanding and control. The science of complex systems aims to find new ways of thinking about the many interconnected networks of interaction that defy traditional approaches. Thus far, research into networks has largely been restricted to pairwise relationships represented by links between two nodes. This volume marks a major extension of networks to multidimensional hypernetworks for modeling multi-element relationships, such as companies making up the stock market, the neighborhoods forming a city, people making up committees, divisions making up companies, computers making up the internet, men and machines making up armies, or robots working as teams.This volume makes an important contribution to the science of complex systems by: (i) extending network theory to include dynamic relationships between many elements; (ii) providing a mathematical theory able to integrate multilevel dynamics in a coherent way; (iii) providing a new methodological approach to analyze complex systems; and (iv) illustrating the theory with practical examples in the design, management and control of complex systems taken from many areas of application