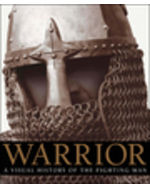 Focusing on the front-line soldiers who fought for their tribes, their cities, their overlords and their countries—from the Ancient Greeks who repelled the invading Persians in the 5th century to the US Marines in action in Korea, Vietnam and the Persian Gulf, this visual history paints a compelling portrait of the front-line soldier through 2,500 years of history. Warrior is organized into six sections, covering six distinct periods in the history of warfare: Phalanxes and Legions deals with the warfare of Ancient Greece and Rome; Conquest and Chivalry explores the age of warriors who fought for either honor or plunder; Pikemen and Musketeers charts the advent of gunpowder in the 16th century; Empires and Frontiers deals with expansion of empires and the clashes of colonization; Trenches and Dogfights looks at the mechanized warfare of World War I and II, when the development of tanks, aeroplanes and submarines as weapons of war marks the beginning of a completely new era; and Guerillas and Commandos shows that despite the proliferation of death-dealing machines the ordinary soldier still retains a role, sometimes highly specialized.