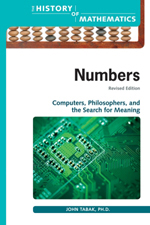 Progress has often been slow when it comes to understanding numbers. Numbers provide a rich source of exotic ideas, philosophical and mathematical, but because many of us are so invested in the familiar, we have often resisted ideas about numbers that are new and unfamiliar. NUMBERS, Revised Edition deals with numbers from the point of view of computation, beginning with the earliest number concepts from ancient Mesopotamian, Chinese, and Mayan mathematicians. It describes the origin and diffusion of Arabic numerals, and it concludes with a discussion of the way that the number system is represented within computers. A new section describes some of the IEEE standards for floating point arithmetic, and a more detailed discussion of the work of G del and Turing has been added to this edition. Irrational numbers and the idea of infinity are also examined in this in-depth guide.