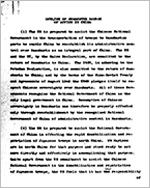 After World War II ended, mainland Chinese politics disintegrated into civil war between the Republic of China and the Communist Party of China. Gen. Douglas MacArthur directed the military forces under Chiang Kai-shek to accept the surrender of Japanese troops, beginning the military occupation of the island. Gen. George C. Marshall tried to broker a truce in 1946, but the Nationalist cause went steadily downhill until 1949, when the Communists emerged victorious and drove the Nationalists from the mainland.

As the People's Liberation Army moved south to complete the Communist conquest of mainland China, the American embassy followed the Chiang-headed ROC government to Taipei later that year. U.S. consular officials remained in China. However, the new Communist government was hostile to this American presence, and all U.S. personnel were withdrawn in early 1950.

From diplomatic listening posts in Hong Kong, Taipei and Tokyo, the U.S. was able to maintain surveillance on Communist China. This collection includes the records communicated to the State Department by diplomatic personnel at first on mainland China and later from these diplomatic posts.