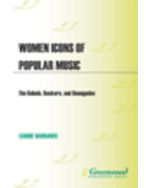 Popular music owes greatly to the spirit of rebellion. In all of its diversified, experimental, modern-day micro-genres, music's roots were first watered by good old-fashioned social dissension- its incendiary heights pushed heavenward by radicals and rogue revolutionaries. And perhaps none are more influential and non-conformist than women. Always first in line to give convention a sound thrashing, women in music have penned sonic masterpieces, championed sweeping social movements, and breathed life into sounds yet unimagined. Today's guitar-wielding heroines continue to blaze the trail, tapping reservoirs and soundscapes still unknown to their male counterparts- hell hath no fury like a woman with an amplifier.

Women Icons of Popular Music puts the limelight on 24 legendary artists who challenged the status quo and dramatically expanded the possibilities of women in the highly competitive music world. Using critical acclaim and artistic integrity as benchmarks of success, this can't-put-down resource features rich biographical and musical analyses of a diverse array of musicians from country, pop, rock, R&B, soul, indie, and hip-hop. It goes beyond the shorter, less detailed biographical information found in many "women in rock" compendiums by giving readers a more in-depth understanding of these artists as individuals, as well as providing a larger context-social, musical, political, and personal-for their success and legacy. Among the featured:

"This set features 24 female artists from the last half-century of popular music, including Patsy Cline, Joan Baez, Aretha Franklin, Janis Joplin, Debbie Harry, Madonna and Mary J. Blige. Havranek’s broad reach extends to country, rhythm and blues, folk, alternative rock, punk, and hip-hop. The biographical entries are all about 20 pages long. Thorough and well-written, they follow a consistent pattern of an overview; early years; career path; mission, motivation and process, legacy and other interests; discography; and a bibliography of digital and print resources for further reading. Although most people won’t read this work from start to finish, there is a consistency of tone and focus that makes comparisons among artists easy. Sidebars connect the biographical subject to engaging related topics: The Dixie Chicks continue Patsy Cline’s legacy; Missy Elliot’s fashion statements influence hip-hop culture; Dolly Parton’s reach extends beyond music as she brands herself through movies, television and fashion. While the covers are attractive, a single black-and-white photograph for each artist and uninspired graphics leave the overall look somewhat drab. As a supplement to other resources on popular music, especially with an emphasis on biographies, this set is recommended for high school and public libraries."--Doug's Student Reference Room, August 2009

"This biographical dictionary surveys the careers of 24 iconic figures in the past half-century of popular music. Stretching chronologically from Patsy Cline and Tina Turner to Missy Elliott and Liz Phair, the selection features a number of musical genres including country, rock, rhythm and blues, folk and hip-hop. Averaging 20 pages apiece, the individual entries provide substantial detail on the formative years, career path and personal creative process. Discussions include the events and background surrounding particular records as well as the themes and stylistic features of individual songs. Creative influences and legacies also are explored. Both group and solo work are highlighted, so the entry on Diana Ross examines her success with the Supremes as well as her solo music and acting achievements. Numerous recording groups are discussed, but only the Indigo Girls earn a group entry. Tori Amos, Joan Baez, Aretha Franklin, Debbie Harry, Janis Joplin, Carol King, Joni Mitchell, Dolly Parton and Patti Smith are among the artists represented. Each article provides a brief discography and list of selected readings for further research. A brief chronology relates the careers of the artists to each other and other musical movements. With its attention on women artists, this set provides a useful complement to the publisher’s previous titles, Icons of Hip Hop (Greenwood Press, 2007), Icons of Rock (Greenwood Press, 2007) and Icons of R&B and Soul (Greenwood Press, 2008). All provide detailed examinations of the creative careers of popular artists. As such, they will find an appreciative audience in high school, public and academic libraries."--Lawrence Looks at Books, June 2009