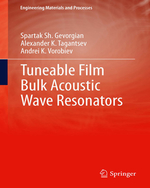 To handle many standards and ever increasing bandwidth requirements, large number of filters and switches are used in transceivers of modern wireless communications systems. It makes the cost, performance, form factor, and power consumption of these systems, including cellular phones, critical issues. At present, the fixed frequency filter banks based on Film Bulk Acoustic Resonators (FBAR) are regarded as one of the most promising technologies to address performance -form factor-cost issues. Even though the FBARs improve the overall performances the complexity of these systems remains high.  Attempts are being made to exclude some of the filters by bringing the digital signal processing (including channel selection) as close to the antennas as possible. However handling the increased interference levels is unrealistic for low-cost battery operated radios. Replacing fixed frequency filter banks by one tuneable filter is the most desired and widely considered scenario. As an example, development of the software based cognitive radios is largely hindered by the lack of adequate agile components, first of all tuneable filters. In this sense the electrically switchable and tuneable FBARs are the most promising components to address the complex cost-performance issues in agile microwave transceivers, smart wireless sensor networks etc.Tuneable Film Bulk Acoustic Wave Resonators discusses FBAR need, physics, designs, modelling, fabrication and applications. Tuning of the resonant frequency of the FBARs is considered. Switchable and tuneable FBARs based on electric field induced piezoelectric effect in paraelectric phase ferroelectrics are covered. The resonance of these resonators may be electrically switched on and off and tuned without hysteresis.